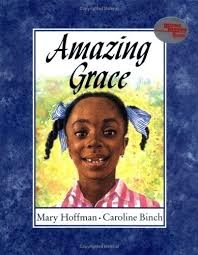 Mary Hoffman’s 1991 picture book Amazing Grace tells the story of Grace, who loves stories and especially loves acting them out. Filled with imagination and dramatic flair, Grace decides that she will play the part of Peter Pan when her teacher tells the class that they are going to perform the play.

When Grace goes home and tells her mother and grandmother what happened at school, they tell her that she can be Peter Pan if she wants to do so. “You can be anything you want, Grace, if you put your mind to it,” her grandmother says.

Soon after, Grace’s grandmother takes her to the ballet to see a African American ballerina play Juliet in Romeo and Juliet. After the ballet, Grace dances around her room, telling herself, “I can be anything I want.”

After the class meets for auditions, everyone in the class votes for Grace to be Peter Pan. The play is a great success and Grace is an “amazing Peter Pan.”

This is a wonderful story for inspiring discussions about race, gender, role models, the limits to our ambitions, and the importance of imagination. Some of the questions students have asked when we’ve read this book together are:
Why do other students tell Grace she can’t be Peter Pan because she’s black and a girl?
Is Grace’s grandmother right that Grace can be anything she wants to be?
Why did seeing the ballerina make Grace more confident that she could be Peter Pan?
Why do we think that appearance is so important?