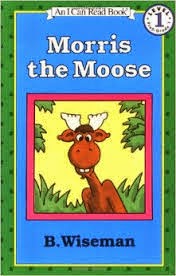 Today I read Morris the Moose by B. Wiseman with a group of 6-8 year olds at the school at Seattle Children’s Hospital. In the story, Morris meets a cow and notes that the cow is a funny looking moose, insisting, despite the cow’s protests, that the cow must be a moose because she “has four legs and things on her head.” When Morris and the cow approach a deer for help, the deer insists that they are all deer, and when the three of them ask a horse to assist, the horse claims they are all horses. It is not until the animals see their joint reflections in the water that they conclude that they are not all the same

I asked the students if they thought the animals were confused. One of the children commented that they had been confused, but once they saw their own reflections they understood that the other animals were not the same as them. We talked about the differences between moose and cows, for example and whether a moose who looked like a cow would still be a moose. Then we wondered about what makes a moose a moose, and a cow a cow, which led us to thinking about what makes us human beings.

“What if an alien being walked in the room and was trying to figure out what makes human beings different from, say, a water bottle or a box of tissues?” I asked.

“We could say that those things aren’t alive,” one student responded.

“Is everything that’s alive a human being? How could the alien tell the difference between us and dogs?”

“But not everything that’s alive talks.”

“How do we know something is alive?”

“Things that are alive move,” a student suggested.

“Not everything that’s alive moves,” another student responded. “Plants are alive and they don’t move.”

“What do you think makes something alive?” I asked.

“Things that are are going to die. Everything that’s alive will die. That’s how we know something is alive.”

This took my breath away. We all then tried to think of things that are alive that don’t die, and none of us could. If you are immortal, are you alive?