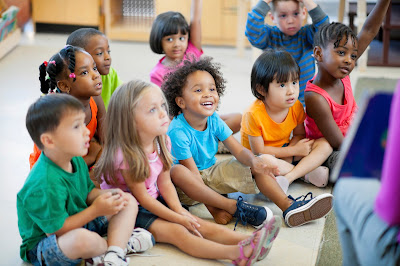 The children contended that children, on the one hand, have less worries, more free time, fewer responsibilities, and less choice about how to spend their time. Adults, on the other hand, have greater responsibilities and obligations to take care of other people, but more freedom and choice. The conversation then led to an examination of the differences between adults and children in making decisions.

One student noted that “parents protect you from bad decisions.”

“Some parents,” responded another student. “Some adults make bad decisions, like drinking and smoking, and don’t treat their kids well.”

“But really the ones with the most knowledge are babies. They see that they have the potential to do anything.”

“But if you’re a baby or a child, you don’t have to take care of yourself. Adults do that for you.”

“And some parents want their children to do better than them, so they help them to make good decisions.”

“Babies are the future you. The future generation. So it’s natural for adults to want to help babies and children.”

“Not always. My father isn’t interested in helping me. I can see that he loves my brother way more than he cares about me.”

“Some adults don’t want to help children, because they are more focused on themselves.”

“But when you’re an adult, you get to decide how to spend your time and make choices about lots of things. Kids sometimes can’t even decide the smallest things, like what to eat.”

“But sometimes you’re asked to make decisions that you shouldn’t have to make. Like my parents asked me to choose if I wanted to be with my dad or my mom when they got divorced.”

“I think that children sometimes can make better decisions than adults. They’re more likely not to be influenced by their friends. Adults care so much about what other people think. Children are more themselves.”

“We are talking about children and adults, but what is a child? When do you become an adult?”

“I think that childhood never stops.”

“I agree. We are always the same people we were when we were born. Baby to death, still the same person.”

“When you think about it, childhood and adulthood are just ideas people thought of and then they put boundaries around these names to create something that isn’t actually real. There really is no such thing as ‘being a child’ or ‘being an adult.’ They’re just labels. We’re all people.”

“I agree. We are always growing and changing. Why do we think there’s such a big difference between children and adults?”