Home / Does what we are matter when thinking about what we ought to do?

Does what we are matter when thinking about what we ought to do? 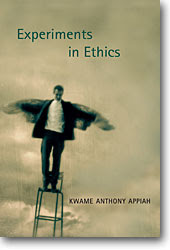 Is science relevant to moral philosophy? In the marvelously clear and accessible Experiments in Ethics, Kwame Anthony Appiah explores the relationship between morality and the empirical research of science.
Many philosophers have held that science in general, and moral psychology in particular, hold little relevance for moral philosophy (stemming in part from Hume’s distinction between “is” and “ought”). Appiah explores some of the findings of empirical moral psychology, including its demonstration that people don’t tend to have consistent character traits (say, honesty or kindness) in the way virtue theorists have imagined that virtuous people do.
Research shows that people’s behavior varies depending on a multitude of factors, many of which are not morally relevant and about which we are wholly unaware (for example, the presence of a particular fragrance). Appiah argues that such empirical facts about human nature must be relevant to ethics, because there’s no point of applying moral norms to people that we are psychologically incapable of obeying. In other words, if it’s impossible for people always to be kind, what use would a moral rule be that requires kindness under all circumstances?
Appiah argues that the research of moral psychology is relevant for moral philosophy, but does not replace it. While moral problems can’t be solved by looking at the way people actually behave in various situations, it is helpful in thinking about morality to understand the research about how various situations affect our moral judgments. Appiah’s version of “experimental philosophy” traces a path for philosophers to utilize science’s insights about human nature to help to make sense of the central project of ethics: as Appiah sees it, this is to make the best possible life for ourselves, while recognizing that everyone else also has a life to make for themselves, and that we are all in this together.