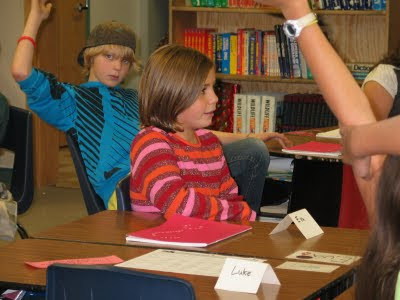 This week the fifth grade students and I talked about dreams and sleep and the mysterious world of non-waking life. Our conversation, excerpted below, ranged from an exploration of dreams and nightmares and why they occur the way they do, to wondering about whether all of life is a dream or illusory in some way. We started by talking about the ways in which sleeping is different from being awake.

One student suggested that perhaps sleep is closer to death than being awake.

“Well,” another student responded, “I think that sleeping is more like unconsciousness than death. Sleeping is really not close to death. I mean, you have to sleep to live. If you don’t sleep, then you will be dead.”

“When you’re sleeping you dream, and when you’re unconscious you dream, but when you die you don’t dream,” offered a third student.

“How do we know that?” asked another. “Nobody knows unless they’re dead whether dead people dream or not. No one comes back after they’re dead and tells us that they dream or they don’t.”

“Whenever I have dreams,” one girl described, “my parents ask me what happened. They tell me that when you dream, your subconscious mind is telling you things that when you’re awake you don’t consider. I don’t think that when you sleep you’re close to being dead. Sleep is part of being alive.”

“I think that a part of your mind takes notes on everything you do, and these come out in your dreams. Dreams get you to deal with things in your life that maybe you are trying not to deal with.”

“So then you have to be thinking when you dream because your mind is working. Without thinking there would be no dreams,” declared a student.

We talked about whether the mind stops working at death, and whether you can ever stop your mind from working when you’re alive. We discussed why we dream, and why some dreams are nightmares, and whether we can ever control our dreams.

“I have a dream about Voldemort from Harry Potter,” one student said. “He’s wearing a t-shirt and shorts, and he rides a bike. He tries to get into our house. He climbs up the outside of the house and starts slamming on the doors, trying to find a way in. I’ve had this dream a few times. It scares me.”

“You can think about things during the day and keep yourself from dreaming about them at night,” suggested another student.

“I wonder if we are really a dream right now,” a boy asked.

“Sometimes,” a girl responded, “I think that maybe we’re all dolls being played with, like my sister playing with dolls. Like maybe there are people much bigger than us just playing with us, like we’re their dolls.”