Home / Duck, Death and the Tulip

Duck, Death and the Tulip 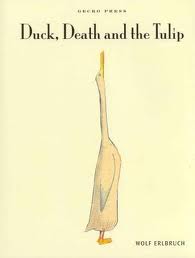 My friend Deb Tollefsen at University of Memphis recommended Duck, Death and the Tulip, by Wolf Erlbruch, which tells the story of Duck and her meeting with Death, who informs Duck that “I’ve been close by all your life.” The two spend some time together, and they talk about death. In many of the frames, Death is carrying a tulip. At the end of the story, Duck dies and Death carries her to a river and lays her in the water, placing the tulip on her body. “When she was lost to sight, he was almost a little moved. But that’s life, thought Death.”

I used the story this fall in discussions with undergraduate students. I also read it with my fourteen-year-old son and it led to a conversation about whether we would live forever if we could choose to do so. He said that he thought if we didn’t have death we’d have “no incentive to do anything” and that it would be hard to get older and weaker and never die. I asked him what he would do if he could choose to live forever at a certain age and stay that age always. We agreed that without change life would seem lifeless. We then talked about what happens when you die, whether the body’s death means the end of all consciousness and whether it’s possible that there are planes of existence beyond our ability to imagine.

I’ve also used the book in philosophy sessions with fourth and fifth grade students, and it’s led to some thoughtful exchanges about life and death, what it means to be mortal, and whether anything ever really dies.

All this from a 30-page picture book!