On Wednesday morning after Tuesday’s election, I led my weekly philosophy session with a group of 5th grade students at John Muir Elementary School. The students are primarily immigrants and children of color. I knew that they would want to talk about the presidential election, and so I brought the book, The Araboolies of Liberty Street, which raises issues of justice, freedom, and community. 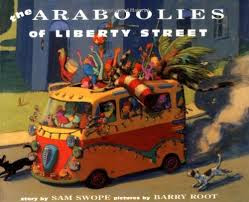 On Liberty street, all the houses are white and look the same. General Pinch and his wife, who live there, spent their days spying on all of their neighbors. They want their street to be quiet and for everything on it to look the same, and they hate fun of any kind. Whenever the kids play outside, the general immediately threatens to call the army. Then the Araboolies, a large extended family, move in next door to the Pinches. The General yells at the Araboolies and threatens to call in the army, but they don’t speak English so they don’t understand the general’s words. The Araboolies paint their house differently and behave in unconventional ways, and they pend a lot of their time having fun. In response, the general orders the army to attack the house on Liberty Street that looks different from all the others and to “get rid of the weirdos” that live there. But the neighborhood children paint all of the houses except the Pinches’ house to look like the house of the Araboolies, so that the army only attacks the home of the Pinches and takes them away.

The question the students framed and wanted to discuss was, “What does normal mean? What would be more normal, a Trump or a Clinton Presidency?”

The ensuing conversation first focused on trying to determine what “being normal” involved. Is it being the same? One student suggested that because everyone is different in some ways from everyone else, there is no such thing as “normal.” Another student responded that you could be different and normal at the same time — for example, he said, you could be unique person and at the same time be “normal” in that you were 10 years old and in fifth grade. And he added that although every president is different, every person running for the office wants to be the president, and that’s normal.

“But I don’t think there is such a thing as a normal presidency,” volunteered another student. “Every president is different. Whenever there’s an election, it takes time to get used to the new president.”

“But then that president feels normal to us,” responded another child. “When Obama first became president, it wasn’t normal to have a black president, but now it is.”

“We think Trump isn’t going to be a normal president,” ventured a student, “because he has made so many mistakes and insulted so many people. But people want to be president to make the country better. So maybe once he is the president we will get used to him and maybe he will do some things to make the country better. So maybe Trump as president will end up being normal, even if it doesn’t feel normal at the beginning.”

The openness and trust in our system of government exhibited by the children is, I think, a very hopeful sign!