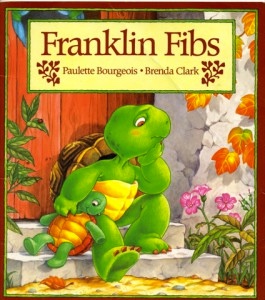 In Franklin Fibs, by Paulette Bourgeois and Brenda Clark, Franklin’s friends are all boasting about the things they can do. Bear can climb to the top of the highest tree. Hawk can soar over the woods without ruffling a feather. Beaver can chop down a tree with just her teeth and use it to make her own dam.

Franklin wonders what to say. He forgets all the things he can do — slide down a riverbank by himself, count forwards and backwards, etc. — and so he fibs, saying that he can eat seventy-six flies in the blink of an eye. Doubtful, his friends egg him on to prove it. Franklin gobbles six flies, and when his friends question him, he claims that he could have eaten seventy more.

Franklin ponders what he should do now. Should he practice until he can eat seventy-six flies in the blink of an eye? Should he desert his friends so they’ll never know he lied to them? Should he come clean?

The story raises interesting questions about the distinction between “fibbing” and lying, and the relationship between telling the truth and friendship, such as:
Why did Franklin tell a fib in the first place?
Is “fibbing” the same as lying? If not, what is the difference?
Is it ever okay to lie?
Is lying for a greater good okay? In what cases would lying be acceptable?
Why did it take Franklin so long to tell the truth?
Does lying sometimes improve our relationships? Does it hurt them? What about fibbing?
Is truth important in friendship?