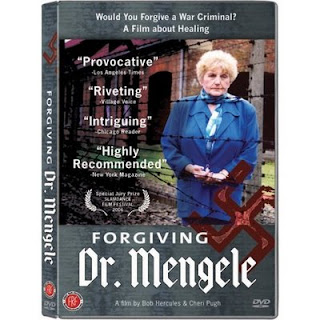 This week I watched Forgiving Dr. Mengele, an interesting and provocative film about the life of Eva Mozes Kor. Eva and her sister Miriam were among the many sets of twins who were victims of Josef Mengele’s horrific twin experiments in the Auschwitz concentration camp. They arrived at Auschwitz when they were nine years old, along with their older siblings and parents. The twins were the only ones to survive.

Eva Kor decided in 1995 that she would publicly and privately forgive the Nazis, including Mengele. She speaks about forgiveness all over the world. Her decision to forgive has been extremely controversial, with many Holocaust survivors incredulous, sorrowful and extremely angry about her stance.

Eva asserts that forgiveness gives the victim freedom from pain. For her, forgiveness is all about the healing process for the victim. Fundamentally forgiveness is not about the perpetrator, but has everything to do with the power of the victim to move beyond the victimization suffered. In the film, Eva reflects, “As a victim, all of us feel extraordinarily helpless. . . . I had the power to forgive a Nazi.” She notes that “whatever was done to me, it’s no longer causing me such pain that I can’t be the person I want to be.”

Other Holocaust survivors contend that one victim does not have the power to forgive Mengele and other Nazis, as most of their victims are dead and no one has the power to bestow forgiveness for them. And what is the point of forgiveness? Certainly it does not mean forgetting. Eva Kors created a museum dedicated to education about the Holocaust, and she is a frequent public speaker about peace, the Holocaust, and forgiveness. But, some of the survivors and other thinkers about the Holocaust argue, forgiveness is empty without acts of atonement by the perpetrators. Forgiveness, in this view, has an objective set of conditions. It is not up to one person to bestow it, based on his or her own feelings or views.

I understand the virtues of this objective position on forgiveness. Clearly, it is problematic to grant forgiveness on behalf of others who no longer have the power to forgive. It’s crucial that forgiveness involves clarity about who is being forgiven and for what. Eva Kors forgives the Nazis for the acts done to her and her family, and she insists that she is not bestowing forgiveness on behalf of anyone else. Does a victim have the power to forgive a perpetrator who was part of a larger evil?

The film really gave me another prism through which to look at this complex question of forgiveness. The difference that the act of forgiveness has made in Eva Kors’ life is inspiring. I think about how much difficulty people have in forgiving each other for injuries considerably smaller than what Eva experienced, and the ways in which failing to forgive can curdle the spirit of the person who remains unforgiving. Eva believes that forgiveness has transformed her from a victim into a person of her own. Her forgiveness of Mengele does not absolve him, but it is freeing for her. Is her forgiveness of the Nazis morally acceptable?