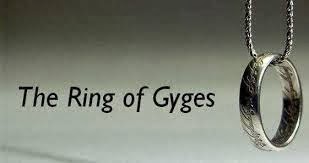 I had an interesting conversation about Plato’s Ring of Gyges story with the fourth grade class I’ve been teaching at John Muir Elementary School. As is my usual practice, I read the students the story and we began talking about what they would do if they had a ring that allowed them to become invisible, and whether the character Glaucon is right when he contends that people act morally only because they are afraid of the consequences if they don’t.

We talked about many issues, including whether people might choose to do good things with the ring that they could not easily do otherwise (for instance, the students suggested, helping people who would be embarrassed to know you were helping them, or helping solve crimes). The students commented that sometimes we do good things without wanting recognition (like giving money anonymously to charity). Several reflected that they wouldn’t do bad things, even if they couldn’t get caught, because they would feel badly inside. “It just isn’t the kind of person I want to be,” one student said, “and even if no one else knew what I had done, I would know.”

The students also discussed whether the ring would end up isolating you from other people because you wouldn’t be able to let people know you had it. Some students concluded that they would not want the ring, because they would be afraid it would change them and their lives in ways they wouldn’t choose.

We then got into a conversation about whether being invisible would really protect you completely from the potential consequences of your actions. One student proposed what I thought was a particularly interesting idea. He noted that being invisible keeps you from being seen, but does not keep you from being perceived in other ways (he noted, for example, that you could brush up against someone and they would feel your presence, or someone might hear you), and so there is some chance that you could be caught engaging in bad acts, even if you’re invisible at the time. What if, he asked, instead of making you invisible, the ring of Gyges made you imperceptible? Not only couldn’t you be seen, he explained, but you couldn’t be touched or heard and you would lack any perceptible scent. But, he reflected as he was thinking this idea through, would you then still exist? If you aren’t able to be perceived, he questioned, then are you still a person?