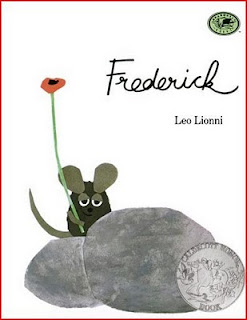 Leo Lionni wrote, who died in 1999, wrote and illustrated many classic children’s books.  I’ve used several of his books to inspire pre-college philosophy discussions. One that is particularly helpful for introducing questions of political and social philosophy is Frederick

, the story of a family of five field mice who are gathering food for the winter.
Everyone is working hard to bring in as much food as they can, except Frederick. Frederick seems to spend his time staring at the meadow and half-asleep, dreaming. When the other mice ask him what he is doing, Frederick replies that he is gathering “sun rays for the cold dark winter days,” “colors . . . [f]or winter is gray,” and “words . . . [f]or the winter days are long and many, and we’ll run out of things to say.”
The story makes no mention of the reaction of the other mice to Frederick’s behavior and explanations, except at one point to describe as “reproachful” the tone in which they ask him if he is dreaming. Once winter sets in, the five mice hide away in an old stone wall, and have plenty to eat and stories to tell. Lionni describes them as a “happy family.” As winter continues, however, there is less food and more cold, and much less chatting among the family members. Then they remember Frederick’s fall activities and they ask him about his supplies. Frederick proceeds to describe the rays of the sun and colors, and begins reciting poetry. The family realizes that he is a poet.
The story raises in a wonderfully subtle way questions about what is valuable work in a society. In a family of five, one member failing to gather food means much less food for the family. Is Frederick’s work of gathering ideas and words and images as important as gathering food? What are the responsibilities of family members to each other? Is Frederick meeting his responsibilities? If Frederick doesn’t gather food but instead spends his time thinking in preparation for giving to his family in a different way, is he entitled to an equal share of the food? Is what Frederick is doing work? What is work? Are some forms of work more important than others?

The story provides an opening to discussing with children questions about the nature of the social contract, the role of the individual in a community, and the relative value of different kinds of contributions to communities. And it’s a lovely story with delightful illustrations!