Home / Freedom and Following the Rules

Freedom and Following the Rules 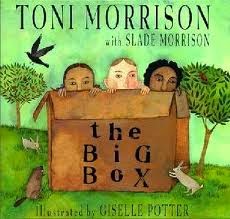 In a third grade classroom at John Muir Elementary this morning, I read Toni Morrison’s The Big Box with the students. The story is about three children who are put into a “big box” after the adults in their lives conclude that they can’t “handle their freedom.” The box is full of toys and their parents visit weekly and bring additional toys and treats, but the children are not allowed out of the box.

Does playing around mean you can’t handle your freedom?
Why do they have to go in the big box?
Why do the parents only visit on Wednesdays?
Why would their parents put them in the box?
Do the kids like being in the box?

The students voted to discuss the question, “Why do they have to go in the big box?” The student who asked that question said that he was wondering why breaking a few rules led the children to lose their freedom. The children talked about how making a choice to break rules was part of being free, and that if what you did wasn’t hurting anyone else, it seemed wrong that this would cause you to lose your freedom. “How can you learn to handle your freedom,” one student asked, “if you don’t have freedom to try things out?”

Another student pointed out that the children in the story did lots of positive things, like taking care of themselves and their homes, but that they received little credit for this. “But,” another student pointed out, “just because you follow some rules doesn’t mean you can then decide not to follow others. You don’t get credit for doing things you’re just supposed to do.” Other students commented that part of learning to handle freedom involves making some mistakes.

Then a student asked, “Why was the box such a nice place to be? If the parents wanted to punish the children for breaking the rules, why put them in a place with lots of toys and junk food?” This led to a discussion about whether you’d choose to stay in a confined space if you had all the toys you wanted and a couple of friends with which to share the experience. Most of the students said no, that they would not choose to be limited to being in one space without access to the outdoors and the ability to meet new people and visit new places, but others weren’t so sure.

After our discussion, the students reflected in their journals in response to the following question: “Would you want to be in the big box?”