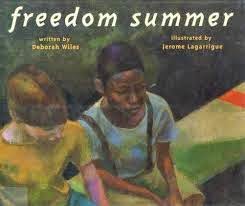 Written by Deborah Wiles and illustrated by Jerome Lagarrigue, Freedom Summer tells the story of a friendship between two boys in the early 1960s in Mississippi: Joe, who is white, and John Henry, who is African American. John Henry’s mother works for Joe’s family. The boys love to swim and they swim together in the creek, because the town pool is closed to John Henry. When the boys want ice pops, Joe goes into the store to buy them, because John Henry is not allowed into the store.
After the passing of the Civil Rights Act of 1964, the town pool is required to be open to everyone, but when the boys arrive at the pool, the pool is being emptied and filled with asphalt by a group of African American workers, including John Henry’s older brother. Shocked, the two boys watch until the men finish.
When the worker have left, John Henry says, “White folks don’t want colored folks in their pool.” Joe says, “I didn’t want to swim in this old pool anyway. “I did,” John Henry responds. “I wanted to swim in this pool. I want to do everything you can do.” Joe doesn’t know what to say. He thinks to himself, “I want to go to the Dairy Dip with John Henry, sit down and share root beer floats. . . . I want to see this town with John Henry’s eyes.” At the end of the story, the boys decide to walk together into the store to buy ice pops.
I read this book with two classes this week, one third grade and the other fourth. In both classes, students asked questions about why the white people in the town would want to fill the tar with pool rather than share it with African Americans, why African American workers were filling up the pool when white people were the ones who wanted to close the pool, and why the white people in the story thought they were superior to African Americans. In our discussions, the children talked about why certain differences among people, like skin color, lead to some groups being oppressed, how people’s choices can be constrained, and how the history of slavery in this country makes racism difficult to eradicate.
Some other questions that are raised by the story:
Why is the book called Freedom Summer? Who is free in the story? Who is not?
Are Joe and John Henry friends?
Why does John Henry eat in the kitchen at Joe’s house, while Joe and his family eat in the dining room?
Why isn’t John Henry allowed in the store? Who decides?
Who controls the town pool? Why is it filled with asphalt after the law requires it to be open to everyone?
Do Joe and John Henry experience the filling of the pool in the same way?
Why don’t “white folks want colored folks in their pool?” Why is the pool considered the white folks’ pool?
Do people have a right to swim in the town pool?
What does Joe mean when he thinks that he “wants to see the town with John Henry’s eyes?” Is this possible?
When the boys walk into the store at the end of the story, who is taking the greater risk? Why?