Home / Getting philosophy into classrooms

Getting philosophy into classrooms 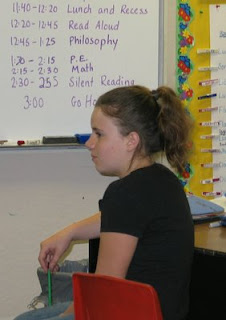 I’m often asked how the center got started and about ways to get into schools to do philosophy with young people. I decided to start the center when I was about to finish my Ph.D. in 1996. I had become interested in working with pre-college students, and a non-profit center seemed to me the best way to do this. Forming a non-profit allowed me to apply for grants and to solicit and accept tax-deductible donations. The center is still an independent non-profit, though in 1999 we became affiliated with the Department of Philosophy at the University of Washington.
The summer before I finished my dissertation, I did a two-week workshop with the Institute for the Advancement of Philosophy for Children in New Jersey. It was fabulous! Inspiring and wonderful training for bringing philosophy into K-12 classrooms.
When the center began, we assumed that we would spend a lot of our time facilitating workshops for teachers. We quickly realized, however, that teachers were already overburdened with growing requirements for what they had to teach, and that especially with the increase in standardized testing, most teachers were not interested in adding another area to what they were doing. (Moreover, in the United States most teachers are relatively unfamiliar with philosophy, as it is not a required secondary school subject and most people who study it choose to do so in college.)
Ultimately we decided that the better approach would be to develop what we call the “Philosophers in the Schools” program. Modeled after “Artists in the Schools” residency programs, our program places adults trained in doing philosophy with young people into K-12 classrooms around Washington State. As short as six weeks to as long as an entire school year, these weekly (and, sometimes, biweekly) sessions use literature, art, activities, and puzzles to talk with young people about the large, unsettled questions of philosophy.
There are many ways to develop this kind of program. If you are not a classroom teacher, the key is to develop a relationship with a teacher or teachers. If you don’t know any teachers, you might start by offering to volunteer in a local school, by tutoring or helping out in classrooms in other ways. This is a great way to get to know teachers and students.
Also, consider talking with teachers in whose classes you are interested in doing philosophy about their upcoming plans. Are there readings or subjects that are being taught in the classroom for which you could prepare related philosophy sessions? One of the most exciting ways to build philosophy programs in schools is to work with teachers to create interdisciplinary units.
For some more detailed ideas about how to start a pre-college philosophy program, see our website. Another good source for assistance is the American Philosophical Association Committee on Pre-College Instruction in Philosophy pamphlet: So, You Want to Teach Pre-College Philosophy?