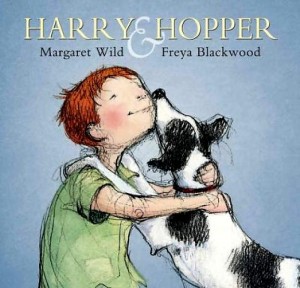 Harry and Hopper is the story of Harry’s relationship with his dog, Hopper. Harry taught Hopper “how to sit, how to stay, how to catch a ball, how to fetch the lease, how to wrestle.” Hopper helps Harry with his homework and Harry helps Hopper run his weekly bath. They are inseparable. Then one day Harry comes home from school and his father tells him that Hopper was killed in an accident. Harry is inconsolable. Then Hopper begins returning, night after night, in less and less solid form, until Harry says goodbye to Hopper for good.

This story is a gentle and powerful one for opening up issues with children about death generally, the loss of a pet in particular, and the mystery of living and dying and what death means. Beautifully and thoughtfully illustrated – for example, when Harry’s father tells Harry that Hopper is dead, we just see their backs, a recognition that this a profoundly personal and painful interaction between the two of them – the book is comforting and unsparing at the same time. I’m going to try it with my second grade students later this month.