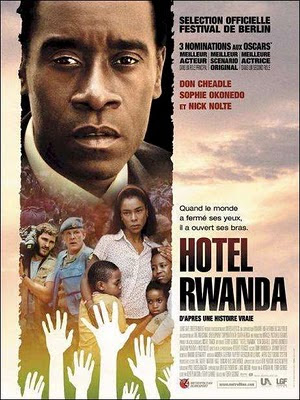 As part of the “Moral Philosophy and Genocide” unit I am doing with eighth grade students, last week we watched the film Hotel Rwanda and then discussed it. We talked about the reasons the international community did not intervene in Rwanda, and what obligations the Western countries had to Rwanda during this period. We also discussed the spectrum of moral obligations. At the beginning of the film, Paul Rusesabagina (the hotel manager and main character) contends that “family is all that matters.” As the genocide in Rwanda unfolds, however, he develops a deep sense of obligation to neighbors and fellow Rwandans, to the extent that at one point he attempts to send his family out of the country to safety while staying behind with the refugees he is sheltering at the hotel. We talked about whether this was the right decision.
We explored the role of the United Nations as “peacekeepers,” and analyzed whether it was right for the UN troops to refuse to fire on the men committing genocide. The students seemed to feel strongly that the UN troops should not have obeyed their orders not to fire, as they would have been able to save more lives had they used their weapons other than in self-defense. Did the larger role of the UN in the country, and in Africa in general, however, require this more restrained role? We analyzed what obligations the UN peacekeepers had toward the Rwandans being attacked and murdered.
We spent a little time talking about whether Paul Rusesabagina was a hero. Most of the students agreed that he was a hero. What makes someone a hero? Someone who puts his or her life at risk for someone else, a student suggested, is certainly a hero.
We’ll continue our discussion this week and explore why the people who did not help others during the genocide became bystanders, examining the nature of indifference and its moral status.