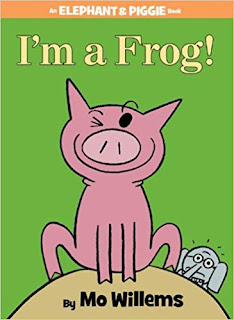 I haven’t been posting this school year very much, as I have been working on my new book, which should be finished before the end of the year and published next year. But I have had several interesting conversation lately with children, and thought I would share some of them.

In a fifth grade class last month, we read the story I’m a Frog by Mo Willems, about which I have written in the past. The story raises questions about the nature of pretending.

After reading the story, the children articulated the questions about which the story led them to wonder. They then voted to discuss the question, “Does everyone pretend?”
“Everyone pretends, but kids pretend more. Kids have more time to play pretend. Like at recess.”
“I was wondering if dreaming counts as pretending. I kind of think it does, because when you dream you’re imagining something.”
“I disagree. Dreams aren’t pretending because they are based on what happens to you in real life and turns whatever happens into a kind of jumbled mess. Actually, I think it could go either way. What you dream is not real, it’s made up, but you don’t get to choose, you don’t make it up.”
“I think that if imagining something when you’re awake is a form of pretending, but you’re not actually doing anything, just fantasizing about something, then dreaming could be pretending too.”
“I don’t know if dreaming really counts, because you’re sleeping and you might not even remember what you dream. Daydreaming, where you’re making up a fantasy in your head, counts as pretending, but not dreaming while you’re asleep.”
“Dreaming isn’t a form of pretending because you’re not intending to pretend anything.”
“I agree. You have to be able to control when you pretend. You can just do it in your head, you don’t have to do physical stuff. But you do have to have control.”
I asked if this meant that pretending had to be intentional, though it did not require doing anything in particular other than thinking about it. In the story, Piggy defines pretending as acting as if you are something you’re not – is that right?
“I think you can pretend to be something you are, too. Like if you have low self-esteem, and you didn’t think you could do something, you could pretend you could do it, and then maybe you actually could do it.”
“If pretending is acting like something you’re not, everyone does pretend. Probably everyone dressed up for Halloween at least once. And even if you didn’t, you pretend that everyone else is actually who they are dressed up to be.”
“I think that pretending is a way of helping your brain practice being creative. You get new ideas by giving yourself a break. Like if you do a lot of math, and you don’t take any breaks and your mind gets cluttered and can’t focus as well, pretending will open up more creativity for you.”
“There is definitely a connection between creativity and pretending. You can spread your creativity in lots of ways, like through art. Pretending is another way to do that.”
I asked, if pretending is positive and important, why do we stop?
“Maturity. You see other people stopping and you think it’s not cool to pretend anymore, that it’s immature.”
“Most kids pretend. When you’re older, maturity takes over your creativity. You think, ‘I’m older, I’m not supposed to be doing this anymore, it’s immature.’ “
“Everyone pretends, some more and some less, and about different things. An adult might not pretend to be a flower princess, but an adult might pretend that they have a lot of money, or that they are the ideal self they want to be.”
“When you’re younger, you pretend, and you’re more confident it can actually happen. When you’re older, you can still pretend the same thing, but you think it probably won’t happen.”
“But maybe instead of pretending to be something, as an adult you can actually just try to become that thing.”
As always, the children left me with a lot to consider. In particular, I’ve been thinking ever since our conversation about the ways in which pretending to be something you actually are, but perhaps are not confident that you are, can allow you to fully grow into that part of yourself.