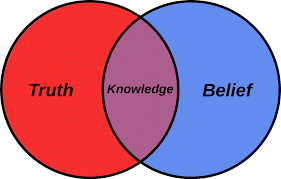 Objectives: To raise questions about how we justify our beliefs and how to sort good evidence from bad evidence.

Bring the class back to a general discussion and ask for a few volunteers to write their starred beliefs on the board. Ask the class about what are some good reasons for thinking these beliefs are true. As examples of each come up, write on the board these categories of evidence: memory, testimony, experience, logical. (“Logical” is a flawed word for what philosophers usually call a priori justification. Since that can be a difficult concept, “logical” seems to be an imperfect, but workable stand-in.) Ask the students which of these kinds of evidence is most trustworthy and why. Ask which is least trustworthy and why.

On the board, write down three false beliefs. For example, “There is a purple elephant in the room;” “The moon is made out of cheese;” or “[Teacher name] is a robot.”

Finally, ask the students to return to their starred belief and to explain why they think they know it to be true, as opposed to just having an opinion that it’s true. After a few minutes, ask for volunteers to share their reasoning.

If you have any extra time, ask the students, as a class, to try to come up with the belief that they are most sure of. Put contenders on the board and have the class vote. End with a discussion about why that belief earns so much confidence.

This lesson plan was contributed by Dustyn Addington.