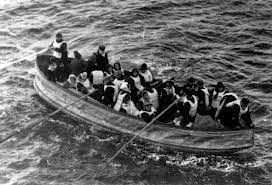 This week at Children’s Hospital’s school, in my weekly session with the older students, I facilitated an activity adapted from an exercise created by my colleague David Shapiro.

Here is a brief description of the activity (in a larger class, this is done in small groups, and there are dozens of characters — the exercise can be found in David’s book Plato Was Wrong!):

We are all in a lifeboat, and our boat is sinking. In order to save everyone, we have to sacrifice one person in the boat, otherwise all of us will drown. I assigned each student a couple of characters, who they will play in a lifeboat. The following are some of the characters:

·     A 22-year-old mailroom clerk in a large law firm, who is planning to get her law degree when she graduates college.  She is not married and has no children.
·      A 45-year-old Certified Public Accountant, who is married with two two teenaged children, and is an active community and church volunteer.
·      A 12-year-old student in 6th grade, who is the president of his class and hopes to be a doctor when he grows up.
·      A 55-year-old homeless person who has been out of work for 10 years, is not married and has no children.
·      A 26-year-old world-famous rock star with fans all around the world, who is single with no children, and has a bad drug habit.
·      A 6-month-old baby who is her parents’ first child and the first grandchild for her grandparents.
·      A 30-year-old police officer, who is married with 2 young children.
·      A 28-year-old welfare recipient who hasn’t worked in 3 years, and has 6 children, none of whom live with her.
The key is that the group has to work together to decide who will be sacrificed, and to agree on the principles, or reasons, that the person who is to be sacrificed is chosen.   And then, most importantly, the person who is to be sacrificed has to be able to articulate why he or she was chosen, and in particular, the principle that was used to make that choice.
We began with considering what principles should guide the decision. The students came up with the following:
1. The more of your life you have already lived, the more likely your life should be sacrificed
2. The more successful your life has been and is likely to continue to be, the less likely your life should be sacrificed
3. The more people with whom you have relationships and who depend on you, the less likely your life should be sacrificed
We then launched into trying to decide who would be sacrificed.
I have done this exercise in many classrooms. For the first time, the conversation revolved not around the characters trying to save themselves, but offering to sacrifice themselves. The young girl who was playing the famous rock star character, for example, said, “I have accomplished all or most of what I’ll ever accomplish in my life, and my drug problem means I might not live very long anyway, so I should sacrifice myself.” When asked about the fans who would mourn, she said, “For them I’ll become a legend. They will be sad at first but they’ll also be glad I sacrificed my life for others, and they’ll never forget me.”
Then the young girl whose character was the homeless person said, “No, I should jump off the boat. My life hasn’t been a success, and I’ve lived a lot of it already. I’m the oldest person in the boat and I have no family.” The rock star responded, “But you could still make something of your life.” Quietly, the girl playing the homeless person said, “This is the most important thing I’ll ever do.”
We discussed this for a long time and most of the group agreed that the homeless person should be sacrificed. Finally, at the end of our time together, I told the group that a rescue helicopter was now coming, but only one individual can be saved.  Who should it be?
The group quickly agreed that it should be the 12-year-old, who had his whole life ahead. Unlike the baby, one student observed, the 12-year-old knew what was going on in the boat. The baby would not suffer the emotional pain of knowing he was likely to die.
The discussion was rich in insight, and afterward I reflected about whether the special challenges these children face provides them with an especially keen awareness of the complexity of moral problems, and particularly those related to life and death.
I’m feeling very privileged to have the opportunity to work with these students.