Home / Listening (or Not Listening) to Children

Listening (or Not Listening) to Children 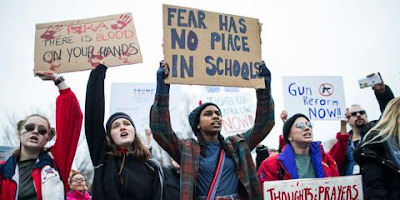 From an editorial in the Wall Street Journal yesterday entitled “Our Childish Gun Debate,” by William McGurn:

Quick show of hands for those with children: How many of you look to your teens for political wisdom, whether it’s the daughter obsessing over her Snapchat streaks or the son who would spend his day eating Doritos and binge-gaming “Grand Theft Auto” if you let him?

Writing about the recent mass shootings at a Florida high school and the call for more gun regulations in its aftermath, led primarily by high school student survivors,  McGurn claims that the current public debate is being governed by two principles, “the important thing is to do something,” and “we ought to look to high schoolers for the answer,” and contends that what we really need is an honest debate about the issues that isn’t founded on an emotional response to a tragedy.
McGurn has a point about the need for an honest and reasoned debate, but what strikes me about his editorial is the ease with which he rejects teenagers as potential contributors to an important public discussion — not because of what they are saying, but because they are teenagers. Not all (or, in my experience, most) teenagers are “obsessed over Snapchat streaks” or “would spend the day eating Doritos and binge-gaming.” And even if they were, should these activities bar them from contributing  thoughtfully to trying to solve a significant social problem? If an adult spends most of his or her time obsessing about fashion, or football, or Facebook posts, does that adult forfeit the right to be heard on serious public issues? Of course not. Yet we are comfortable discounting young people’s voices solely on the basis of their ages, and denigrating the ways they spend their time and the things that matter to them, in ways we would not treat adults.

One of the great unexamined assumptions in contemporary life is the view that children and youth, because of their “developmental stages,” are less worthy of being considered full members of the human community. We readily define young people only by their ages, as if being a fourteen year old, for instance, tells you everything that is important about a particular child. This is very much an example of the “danger of a single story” that novelist Chimamanda Ngozi Adichie discusses in a 2009 TED Talk, in which she describes the stereotypes that take hold when complex human beings are reduced to a “single story” (for example, “She is an immigrant,” “He is from Africa,” etc.), as if that one narrative takes full account of what you need to know about another person.

Children and teenagers are more than their ages. I have been inspired by the young people in Florida and around the country who have reacted to this latest school massacre with passion, courage, and determination. This is not to say that everything they assert should be accepted uncritically. Far from it. To take someone seriously means to engage in a genuine way with what they are claimng, not to accept it without analysis. But that is a very different approach than dismissing what the students are saying just because it is them who are saying it.