For Parents: A Resource About Children’s Questions During the Pandemic 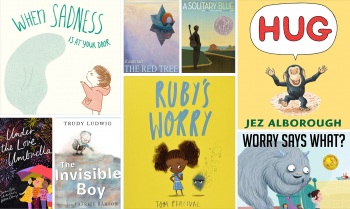 During this time, many children are grappling with large and difficult topics such as fear and worry, loneliness and isolation, boredom, and illness and death. In April, the Center created a resource, which includes questions, children’s books, and short videos, to help parents and other adults foster conversations with kids about some of the questions they are asking during the pandemic.

When children raise these kinds of questions, adults are often inclined to try to offer an explanation in an effort to comfort a child who is feeling bewildered by the world. But providing comfort or a mollifying explanation may not be what the child needs or wants. They might simply want to talk about their questions, thoughts, and feelings.

Philosophical discussions afford an opportunity for different kinds of interactions with children because, unlike many of the topics about which we talk with children, philosophical questions don’t have settled and definite answers.

Make time to listen to your children’s questions and to think aloud together. Don’t worry about getting to the right answers – the point is to explore the questions. Sometimes the questions are more important than finding the answers.

This has been the third year that the Center has hosted a monthly seminar at UW on philosophical inquiry in classrooms. Approved for up to 13.5 clock hours, the seminar involves teachers, faculty, graduate students, and others doing philosophy together and exploring how philosophy can enrich student learning. The seminar met each month during the fall quarter. Since the pandemic, we are now meeting monthly on Zoom.

Sponsored by the UW Center for Philosophy for Children and the Department of Philosophy, the workshop is free. For more information, contact Debi Talukdar.

Like people around the world, we are reeling from the pandemic’s rapid upending of our everyday lives.

Until March, our work in the schools and at the university was busier than ever. A cohort of ten faculty, graduate students, and trained philosophy instructors led regular philosophy sessions in more than 35 classrooms in 9 different schools around Seattle, and dozens of undergraduates visited and participated in our philosophy classes with children. Several new schools joined this year’s High School Ethics Bowl, and the changes we have instituted to make the event more inclusive and dialogical have been enthusiastically received.

Of course, the COVID-19 crisis changed all of that, as well as forced the rescheduling of both our annual June workshop for teachers and the PLATO Conference scheduled to be held in San Diego at the end of June. We are planning that both events will take place in June 2021.

Since the stay at home order, the Center’s work has moved online. We are running weekly Zoom philosophy sessions for groups of children, and we’ve had spirited conversations about such topics as the benefits of uncertainty, the nature of home, and whether we always appreciate things more deeply when we are deprived of them. We are also providing regular philosophy resources and ideas to teachers. Our spring “Philosophy in the Schools” class at UW, involving graduate and undergraduate students, is in full swing, and the students in that class are able to observe and contribute to the Zoom sessions with children.

In April, in response to positive feedback from parents about our Zoom philosophy sessions, we created a resource for addressing some of the issues children are wondering about in response to COVID-19. I was also invited to write an article for The Conversation about children’s big questions during the pandemic.

We are proud that we have been able to use our expertise to contribute in these ways and hope that they will help families to deepen and expand their conversations.

Philosophers in the Schools

This school year, up until March, our Philosophers in the Schools program involved over 35 philosophy classes in Seattle public school classrooms in nine schools, as well as several philosophy classes in the UW’s Robinson Center Saturday Program, led by faculty, graduate students, and volunteers, and also involving students enrolled in our UW classes.

This was the seventh year of the philosopher-in-residence program at John Muir Elementary School, and Karen Emmerman (Ph.D. philosophy, 2012) continues to serve in this role. We greatly appreciate the support of the Squire Family Foundation, which has funded this position since the beginning. Philosophy is now one of the programs highlighted by the school and most teachers have some philosophy in their classrooms. We see many students finishing fifth grade who have had philosophy every year since kindergarten.

This was also the second year of the philosopher-in-residence program at Thurgood Marshall Elementary School, thanks to the support of a donor who has made a long-term commitment to this new program. We are thrilled that Debi Talukdar, Ph.D. Candidate in the UW College of Education and former Philosophy for Children Graduate Fellow, is serving in this role for the second year. Thurgood Marshall, like John Muir, is a racially and ethnically diverse Title I school in south Seattle, and the two schools feed into the same middle school. This was the Center’s fifth year running philosophy sessions at Thurgood Marshall. We are very excited that our presence at the school continues to grow, with many classrooms holding regular philosophy sessions.

We hope that all of these programs will continue in 2020-2021, and that the schools are able to open as usual in September.

The 2020 Washington State High School Ethics Bowl was held on February 29, 2020, at the University of Washington School of Law. It is hard to believe that not that long ago we were engaged in an event involving more than 200 people!

The Ethics Bowl is a collaborative yet competitive event in which teams analyze a series of wide-ranging ethical dilemmas. High school students from around the state, teachers, judges, lawyers, UW faculty, and other educators all participated and supported the students.

Unlike debate, Ethics Bowls do not require teams to take adversarial positions or hold fast to assigned perspectives. Instead, students have a forum in which to engage in dialogue, and they are judged on the quality of their analysis – how well they reason through the issues, present arguments, analyze a case’s morally relevant features, and respond to commentary and questions – and the degree to which they engage in a thoughtful, civil exchange.

Why are kids asking such big questions during the pandemic? - The Conversation

When Kids Ask Hard Questions, Don’t Be Afraid to Lean in - Jewish in Seattle Magazine

What Would You Do? - Scholastic Scope

Focus on the (Zoom) Classroom

Since April, several of the Center’s philosophy instructors have been meeting with groups of elementary school students to do philosophy online every week.

With all the stress around the pandemic and resulting school closures, I had no idea what to expect of my sessions. But it’s actually been working well, and I’ve learned that the children are better at using Zoom than I am.

Two weeks ago, we watched a read aloud of They All Saw a Cat by Brendan Wenzel. It’s a beautiful and thoughtfully illustrated book that follows a cat walking through the world. The cat is seen through the eyes of a child, a dog, a fox, and various other creatures. Each perceives the cat differently.

In the previous week, we had discussed how an object can be used in multiple ways if you are imaginative enough. For example, a cheese grater can be used as a sieve or a fly swatter. After reading They All Saw a Cat, one student connected the book to that earlier conversation, and observed that the same cat is perceived differently by different animals because their perspectives are based on the relationship they have with the cat. There isn’t one way to see the cat, they observed, let alone a “right” way.

We spent most of the session reflecting about what influences our perspectives. Students suggested that our early interactions with objects, people, or ideas shape how we come to see them over time. One student told us that he loved eating sweet potatoes as a young child but hates them now because once he became really sick after eating too much of them. A visiting UW student offered the opposite example of hating sweet potatoes as a child, but really enjoying them now. Another student responded that the world would be quite boring if we all had the same likes and perspectives on things. “The world is interesting because people aren’t all the same,” she said. I asked, “If all perspectives are valid, why do we get upset when people disagree with our own?

We ended our session wondering if having a perspective is uniquely a human experience due to our strong emotions and memories. Could computers ever “evolve” to have their own perspectives?

Philosophy in schools makes space for children and youth to explore together some of the foundational questions in life that matter most to them. Students often observe that this is one of the few places in school that they feel empowered to ask their own questions and seek their own answers, building their confidence in their own perspectives and ideas.

We need your help!

The Center's work is largely made possible through individual donations.

Gifts from donors help fund our Philosophers in the Schools program, the Philosophy for Children graduate fellowships, the High School Ethics Bowl, our family programs, and our annual workshop for teachers.

Resources are needed to provide more support and education for teachers and reach more young people interested in philosophy. We are working to build our capacity to keep philosophy in the schools and in the community growing! Please help us with a gift to support this work.

Please consider making a tax-deductible donation to the Center!

You can donate online here.

You can also send a check to:

Your gifts make all the difference - thank you!

We are very appreciative of the Department of Philosophy’s continued support of the Center!

More on Being Alone and Loneliness, and Being “Connected”

Frog and Toad — Being “Alone Together”

Seen and Not Heard