Home / Philosophy and The Purloined Boy

Philosophy and The Purloined Boy 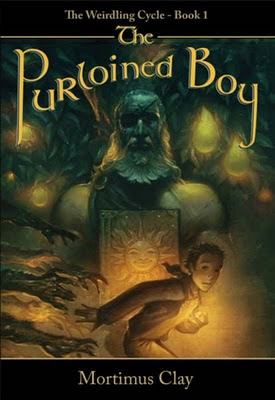 I recently had a conversation with Christopher Wiley, whose num de plume is Mortimus Clay, the author of the young adult fantasy novel The Purloined Boy. The novel was a finalist in the Young Adult Fiction category of the National Best Books 2009 Awards from USA Book News. The plot of the book utlizes themes and ideas from Plato and Aristotle to explore issues about metaphysics, epistemology, and social and political philosophy. The author is a Presbyterian minister who for about a decade taught philosophy part-time to undergraduates at Eastern Nazarene College.

What led you from philosophy to writing young adult fantasy?

For me there wasn’t a direct road from philosophy to fantasy. Both have been part of my life since I started reading seriously as a teenager. I didn’t begin to write young adult fantasy so that I could encode philosophy in order to slip it past the unsuspecting reader. Instead – I’m a philosopher who loves fantasy and got an idea for a story stuck in his head and used philosophy to help get it out.

Do you think that fantasy novels are a particularly good way to facilitate young people’s exploration of philosophy?

Fantasy is a great place to explore philosophical themes. You can even have fun with characters – basing them on philosophers or schools of philosophy. The easiest thing to do is to work with symbolism and foreshadowing. But I think the most fruitful use of philosophy in writing fiction is allowing philosophical problems to arise for the characters to address within the context of the plot. I’d say that philosophy, when practiced well, helps us identify the fundamental issues to respond to in any situation we find ourselves in. Since it is helpful in that way in our lives – it certainly can work that way in a narrative.

You mentioned in our mail exchange that the books are “an attempt to live philosophy from the inside.” What do you mean by that?

Each of us has a life to examine and we examine it from the inside. What makes literature an art that can’t be replaced by any other medium is that it allows the artist to speak within the mind of the reader. All other forms address us from the outside. Even music must be audible to be received. Only the written word enters silently, paradoxically from without and from within at the same moment. As such it enables the writer to propose ideas, images, judgments, etc. with the inner voice of the reader. At the same time the reader is taken out of himself or herself and enters the mind of the author – through the narrator or a character.

Now literally there is no such person as the character one reads about in a book. Even accounts based on real events are not literally true. They’re representations. But they can tell us something true. (Here is where I think Plato was inconsistent. His philosophy of art and his method for teaching philosophy stand in contradiction.) When good fiction does its work disbelief is suspended for a time and the reader can envision the world from another’s perspective. I can’t imagine a better way to introduce metaphysical, epistemological, and ethical questions to someone. One might say propositions do that. But they don’t, really. A proposition is something a thinker holds before himself or herself and considers. One doesn’t enter into it unless he or she has an unusually sympathetic disposition and a powerful imagination. Through fiction I can help readers entertain questions they may not entertain in any other way.