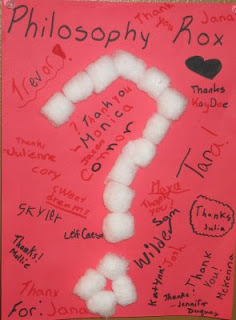 I was reflecting this morning about a conversation I had last week, in which I was asked by an acquaintance about my work. Her response to what I do was, “Philosophy? I took one philosophy class in college, but it was so difficult!” I’ve been thinking about this because it is so typical of the response I get when I tell people what I do, but it is not at all the response my pre-college students have, and it is not the response I think they will ever have.

Most of the K-12 students I’ve worked with are really comfortable with philosophy after several classes (not all of the students take to it, of course, but I don’t think any of them feel intimidated by the discipline). I think back to my introduction to philosophy. I was lucky enough, in a public high school, to have the opportunity to take a philosophy class, and it is what inspired me to study philosophy in college. And after all my years of studying philosophy, the foundational affection I have for the discipline is still rooted, I think, in that high school class and its emphasis on exploring the big mysteries of life with which philosophy began.

I guess this is one of the main reasons I think it matters that students get introduced to philosophy earlier in life than college. College philosophy classes are taught in a certain way, and the emphasis on the history of philosophy and learning the arguments philosophers make in support of one view or another can be both intimidating and mystifying if you haven’t already developed an interest in the questions themselves. Many college students do embrace philosophy after an introductory college class, but many more take one class and that’s it, or are never introduced to philosophy at all. My hope is that many of the students I’ve taught over the years will take philosophy classes in college because the students have been thinking about the questions and have become interested in what philosophers have to say about them!