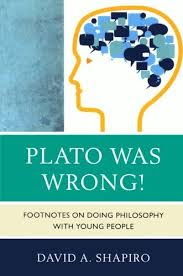 The Center’s Education Director, David Shapiro, has written a wonderful book – Plato Was Wrong! Footnotes on Doing Philosophy With Young People – that compiles activities and games he’s created over the years to inspire philosophical inquiry with young people. These activities can be used as a starter in a philosophy session or as the basis for the entire discussion.

For example, Keep the Question Going, an activity I often use, gets get students listening to each other, while keeping in mind the importance of questions in philosophical inquiry.  It requires students to listen to each other and respond in a manner that constructs a coherent sentence – in this case a question.

How it works:
1.     Make sure students can more or less all see each other. A circle is ideal but, even if students are sitting in rows, it’s helpful if they can all turn so that they can keep an eye on their classmates as the exercise proceeds.
2.     The goal of the exercise if for students to see how long they can keep a question going, one word after another, each word added by a subsequent student.  When a student thinks that the question has ended, he or she claps his or her hands, indicating that a new question is to begin. So, for instance, suppose the first student begins with the word, How, the next says does, the next life, the next begin.  At this point, that last student might clap his or her hands to indicate the question is finished.  Or, if not, the following student would have to keep the question going, perhaps by adding the word on, to which a subsequent student might say Earth, and then clap.
Comments
One guideline to keep in mind, and communicate to students, is that it’s not permitted to just add the word andto the end of what the previous student has said. Students should be discouraged from creating never-ending chains or nonsense questions such as ‘How did life begin on Earth and Mars and Pluto and Saturn and …?”
It’s important to emphasize that students should listen to each other and refrain from shouting out suggestions to their fellow students.  Also, what we’re really trying to do is formulate interesting and provocative questions that we might like to explore together. You could make a record of the questions produced and use them for question analysis genuine enquiry.
A facilitator might also run the activity with the goal of formulating two or three questions that the class agrees to explore in more detail.  Then, the exercise isn’t so much about the length of the question, but the quality of it.
In any case, at the conclusion of the exercise or at some other convenient time, it can be an option to lead a reflective discussion about what has just happened.  You might ask what makes a given question more intriguing or more ‘philosophical’ than another.  This isn’t a required part of this exercise, especially if the exercise is being used as an energizer at the start of a class; it has, though, on occasion led to some pretty interesting discussions, especially as students raise questions about the nature of questioning.
You might also say, for example, say: ‘Can we make this question better by adding words, taking them away or changing them? Once the usefulness of the process is established, students may be more inclined see their own questions as works in progress that could be improved.