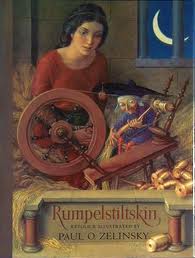 I’ve been re-reading fairy tales and exploring their philosophical potential. So many questions, especially about ethics, are raised by these stories! I just read a version of the Brothers Grimm story Rumpelstiltskin, as retold and illustrated by Paul Zelinsky. The story can be read, of course, as a morality tale about the greed of Rumpelstiltskin and his willingness to take advantage of the desperation of the miller’s daughter, who must spin straw into gold or the king will have her killed.

Rumpelstiltskin asks the miller’s daughter to promise him her necklace, her ring, and then (when she has no material things left) her first child – are the first two requests morally permissible? Should Rumpelstiltskin help her without asking for anything in return? Is it just the final request that is over the moral line? Should the miller’s daughter have made this promise? Why isn’t she obligated to keep it?