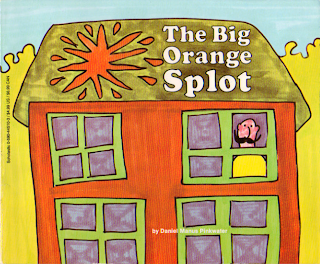 by Daniel Manus Pinkwater is a picture book that tells the story of Mr. Plumbean, who lives on a street where the houses are all the same, painted red with olive-colored roofs and windows with green trim. He and his neighbors all like this, characterizing their street as a “neat street.”

One day, a seagull drops a can of bright orange paint on Mr. Plumbean’s house, leaving a big orange splot on the house. Everyone on the street sympathizes with Mr. Plumbean, who will have to paint his house again, and that’s what Mr. Plumbean plans to do. But, instead, he looks at the house for a long time. Finally, in response to his neighbors’ urging, Mr. Plumbean takes out some paint and paints his house. But instead of using the house’s original colors, he paints it a rainbow of colors. Over the next couple of days, he adds to his house a clock tower, palm trees, a hammock and an alligator.

Horrified, one by one the neighbors stop in to see Mr. Plumbean to talk with him about their dissatisfaction with what he’s done to his home and remind him that all the houses have to be the same for their street to continue to be a “neat street.” And, one by one, after each neighbor visits with Mr. Plumbean, sitting under the palm trees, drinking lemonade and talking, each neighbor repaints his or her own house to “fit his dreams.”

This is a wonderful story for inspiring conversations about conformity and independence and our obligations to our communities. I talked about this story this fall with my fourth grade students from John Muir Elementary. We had a lively discussion about whether Mr. Plumbean was right to paint his house in a way different from his neighbors, when part of the community agreement was that they would keep their houses looking the same. The students were really curious about what it was that made Mr. Plumbean’s decision to paint his house to “fit his dreams” so compelling to his neighbors, so that after spending time with him they all changed their minds about how their street should appear. And what if the neighbors had continued to want all the houses to look the same? The students were strongly supportive of Mr. Plumbean’s right to have his house look the way he wanted it to look, even if it offended his neighbors. What if, though, he painted words expressing his hate for an ethnic group? Would that be okay? At what point does his right to make an independent choice give way to his obligations to his neighbors?