The Book Thief and Psychological Egoism 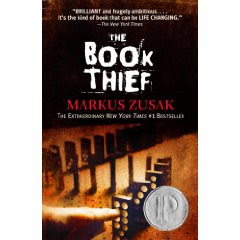 On Friday I had a marvelous discussion with a group of students in an eighth grade English class about The Book Thief, a novel by Markus Zusak. The story is told from the perspective of Death, who describes his experiences during the Holocaust, and in particular the story of a young girl living near Munich. This was our second meeting to discuss the book, which is beautifully written, darkly funny, and deeply moving.
At one point we were talking about the family of this young girl, who are hiding a Jewish man in their basement, and the courage and selflessness of these people. One student commented, “I don’t think that they’re selfless, really. I actually don’t think anyone can ever really act other than in ways that benefit themselves.”
I pointed out to the students that there is a philosophical view, psychological egoism, that holds that people are always motivated by self-interest even in what seem to be acts of great unselfishness, and explained a little about it. “What do you think?” I asked.
The students were sympathetic to the view. “When you think about it,” noted one student, “most of the time, when people do nice things for other people what they really want is for people to think that they’re good people.” “Really,” said another student, “everything we do, we do because it benefits us in some way.”
Giving the students one of the standard objections to psychological egoism, I asked, “Well, what about a parent who gives up her life to save the life of her child? Is there any way we can say she is benefiting herself? After all, she’s dead and so unable to appreciate any benefits at all.” Some of the students thought this presented a significant problem for psychological egoism. But the student who initiated this discussion countered, “She could think she’s going to heaven.” “Okay, let’s assume she doesn’t believe in heaven,” I replied. “Well,” another student responded, “she could think that her life would be miserable if her child died. And her last moments would be pleasurable to her in a way because she knows she is saving her child’s life, and so that benefits her.”
We talked about the characters in the novel, some of whom risk their livelihoods and their lives to help others. Can we really call that self-interested? Isn’t there a difference in self-interestedness between the family who took in a Jewish man hiding from the Nazis, and people who took advantage of the black market in Nazi Germany to profit from the war?