Home / The Custom of Racism

The Custom of Racism 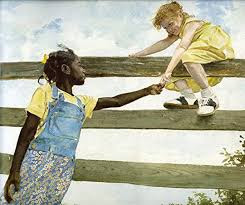 This week I had a conversation with a group of fifth grade students at Thurgood Marshall Elementary School that began with reading Jacqueline Woodson’s The Other Side. This picture book tells the story of a friendship that forms between two girls in a time and place in which a fence stretches through the town separating the white and black townspeople.

The students wanted to talk about who had made the fence and why. The first student who spoke said it was obvious, that the fence was made by white people because of racism. Other students speculated that the fence might have been put up for all kinds of reasons – farming, a company owning the land, two landowners keeping their property separate – but then it became a symbol, as one student put it, of “segregation and racism.”
“Metaphorically speaking, the fence was built by history. There have been lots of times of unfairness in history. But it’s not all one-sided. Sometimes white people and black people just don’t like each other, and both sides want to be separate.”
“Maybe, but in the story the white people were the ones with the power, and they built the fence to keep black people out.”
“The fence is a warning. It’s not a physical obstacle, because you can easily climb over it. It’s a warning about what will happen to you if you violate the rules of segregation.”
This led to the question about whether the enforced separation between races still happens today.
“Yes, but it’s more vague and not a threat in the same way it was then. There aren’t fences separating black and white people that are as intentional and obvious.”
“I agree, it’s still happening, but not as publicly. It’s more secret and private, and not as accepted by the community anymore.”
“It’s not the law anymore, so it’s less about segregation and more about the privileges white people have: white people getting jobs when black people are more experiences, white people being paid more, or white people just getting treated better. It’s not as accepted by the community, so if you do something racist, people disapprove, but it’s still there, just less distinct and publicly accepted.”
“I think that things are getting better. This school used to be totally segregated and now it’s not. But racism is more a custom than a law now, and that makes it harder to get rid of it. People are used to racism and when something is a custom, it’s much harder to change than it is to change the law.”
I was really struck by how well these students, a very diverse group, were able to talk about this issue without it being focused on the personal, as an abstract and important question that affects everyone’s lives, but that could be explored in a dispassionate, thoughtful way. And it led me to think more about the distinction the student made between laws and customs, seeing customs as the more intractable of the two, and changing the law as only the first step toward genuine change.