Home / The Dragon who liked to spit Fire

The Dragon who liked to spit Fire 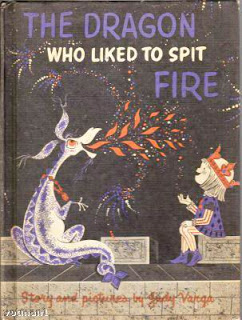 by Judy Varga, written in 1961, tells the story of Darius, a little dragon, and the friendship he develops with young prince Frederic. Can Darius be himself, a dragon who likes nothing more than to spit fire (in many colors), and still be friends with Frederic?

Darius decides to move to Frederic’s castle with Frederic. Darius makes this choice because he has been lonely and he wants to be close to Frederic, although he is wary that he will not be able to spit fire at the castle. As Darius tells Frederic, “[L]ife without spitting fire wouldn’t be much of a life for a dragon.” Frederic tells Darius that he will be able to spit fire when they are alone. Darius is made to feel very at home in the castle, but he finds that he can’t ever spit fire, because he and Frederic are never alone.

The story, with its marvelous illustrations, makes me think about friendship, and whether compromises are essential to human relationships. If so, are there compromises that demand too much of us? How would we know? Is Darius being asked to give up something that is too important to him for a friendship to require its absence? Is being a dragon essential to Darius’ identity, and is spitting fire necessary for his well-being? I am putting this one on my list to try out with my fourth grade students!