Home / The experience of childhood

The experience of childhood 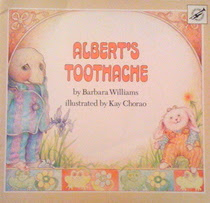 by Barbara Williams, one of my favorite picture books. In the story, Albert, a turtle, complains that he has a toothache. His family points out that he has no teeth, and so he cannot have a toothache. “You never believe me,” Albert protests, and he takes to his bed. His parents and siblings lament that Albert is not telling the truth. Finally, his grandmother arrives, and asks Albert, “Where is your toothache?” Albert tells her that it is in his toe, where a gopher bit him.

I read the story to the students and then, as is our practice, we took a minute to reflect before the students articulated the questions the story raised for them. They chose to begin our discussion with the question, “Why did Albert say he had a toothache when the pain was in his foot?”

The students commented that perhaps Albert was confused or misunderstood what a tooth is. One student suggested that what Albert might have meant was that his pain came from the gopher’s tooth, so that’s why he called it a toothache.

We moved from that question to another student’s question, “Why didn’t Albert’s family believe him, and why was his grandmother the only one who tried to figure out what he meant?” The students observed that the family seemed to have a “story about Albert,” in which Albert was the family member who often made things up. One student remarked that often children aren’t believed.

“Do you think the family would have reacted differently if it was Albert’s mom who was complaining of a toothache?” I asked. Unanimously, the class said yes, it would have been a completely different situation. “Why is that?” I inquired.

“Not always,” responded another student. “Adults sometimes lie about things. Like when children are being abused. Adults will lie about it to protect themselves, and often people believe the adults instead of the kids.”

“I think,” put in a student, “that people think of kids as becoming adults, and so they expect kids to make all kinds of mistakes that they don’t think adults will make.”

“So is childhood an experience about becoming an adult, or is there more to it than that?” I asked.

“I think,” ventured a student who had not yet spoken, “that children are deeper than adults.”

“I mean that childhood is not just about becoming an adult. It’s a time of its own. What happens to kids affects us our whole lives. That’s mostly not true for adults. I think what we experience we feel more deeply, and it stays with us.”