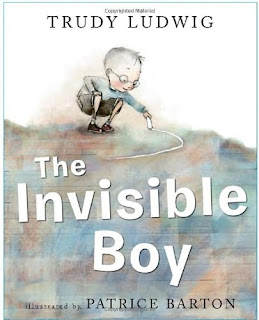 The Invisible Boy, a 2013 picture book written by Trudy Ludwig and illustrated by Patricia Barton, was recommended to me recently by a colleague. The “invisible boy” of the story is Brian, who, unlike some of his classmates, doesn’t “take up a lot of space” and isn’t noticed by either his teacher or the other students. 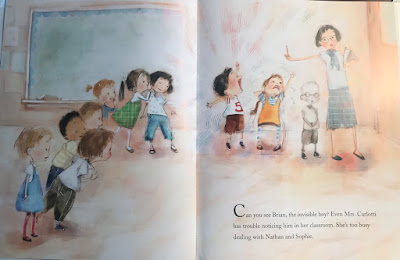 Brian spends much of his time drawing, which leads to a connection with a new student, Justin, and this connection leads to Brian finally being “seen” by the other children. 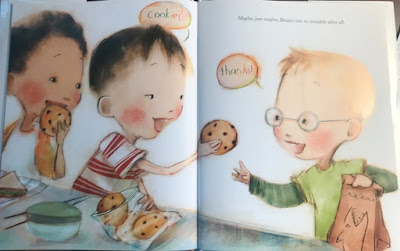 I read the story with a group of 4th grade students yesterday, and the questions they wondered about afterward included:

Is it harder to be laughed at or to be invisible?
Was Brian actually invisible or did he just feel invisible?
What would it feel like to be Brian?
Does drawing make Brian feel visible?

The children chose to begin our discussion with the question, Was Brian actually invisible or did he just feel invisible? The child who asked the question said that she was wondering, given the illustrations, if Brian was meant to actually be invisible to those around him, or just to feel invisible.

I asked, “What is the difference between being invisible to others, and feeling invisible?”

“Well,” she responded, “I guess that when you feel invisible, it really is about what is inside of you and not the people around you. So if someone notices you, then it might be easy to stop feeling invisible. If you actually were invisible to others, that would be harder.”

“I agree and disagree,” said a second student. “I mean, if you feel invisible, that usually is because other people make you feel that way. But also you have to do something not to feel invisible. Other people aren’t going to go out of their way to be friends with you if you don’t try. I don’t think Brian tried very hard in the story.”

“I disagree,” replied another student, “I think he did try. Look at the part where he was waiting to be chosen for a kickball team. He was trying.”

“And he was the one who tried with Justin. That’s when he started to feel visible. When he made friends with Justin.”

“So do other people help us to feel visible?” I asked.

“Yes, but we also have to try. Most people feel invisible at some point, but you can’t expect other people to make you feel visible.”

“Yeah, but someone who is really shy, they might feel invisible more than other people. Some people find it easy to walk up to people and just say, ‘Hey, how are you doing?’ But other people are just more shy.”

“But if you don’t want to feel invisible you have to take some responsibility,” contended another student. “You can’t just wait for someone to come up to you. It might be harder for someone who is shy, but they still have to do something to make a friend.”

“Yeah, like take someone who is really popular,” a different student put in. “They probably have a lot of friends, so they’re not going to go out of their way to be friendly to someone new.”

“Yes, if you already have a lot of friends, you’re probably not going to go up and just start talking to some random person.”

“So does having lots of friends mean you become less friendly?” I asked.

“There have been several comments about being popular. That makes me wonder, what does it mean to be popular?” I asked.

Hands shot up all around the room.

“It means having lots of friends.”

“It means lots of people like you and want to be your friend.”

“It means people want to hang around you. But that doesn’t mean you have a lot of friends. People might want to be friends with you because you are popular, but that doesn’t make them friends.”

“What does make someone a friend?” I asked.

“I was friends once with a popular girl, but she really didn’t care about me or how I was feeling. It was always about what I could do for her. If I had a bad day or was sad, she wasn’t interested. So she wasn’t really a friend.”

“I agree. Sometimes popular people have real friends and sometimes they don’t.”

“What does ‘having real friends’ require?” I asked.

“It requires that you like being together, that it’s not always about one person giving something to the other.”

“I agree. Having a real friend means that being with that person makes you happy.”

“No, not always. But the friendship makes you happy because you both care about each other. Some friends can be people you like to do something with, and others can be from different parts of your life. Like if your parent is your friend, that’s different than a friendship with someone in your class.”

“So are there different models of friendship?” I asked.

We ran out of time after an hour, but could easily have kept going!