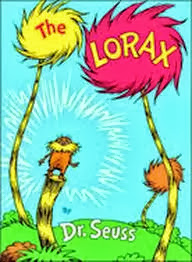 A plug for the philosophical suggestiveness of books by Dr. Suess! And for entering a philosophy session not knowing where it will lead.

Today I read the story The Lorax, published in 1971, with a second grade class. In the story, the Once-ler describes how he arrived in a town full of Truffula Trees, with their bright-colored tufts, and immediately had the idea of cutting them down to make “Thneeds.” When he cuts the first one down, the Lorax appears, and announces that he speaks for the Truffula Trees. The Lorax is very upset about the Truffula Tree having been chopped down. “What is that thing you have made out of my Truffula tuft?” he asks.

The Once-ler explains that it’s a Thneed, which is a “Fine-Something-That-All-People-Need,” with multiple uses (“It’s a shirt. It’s a sock. It’s a glove. It’s a hat. But it has other uses. Yes, far beyond that.”) 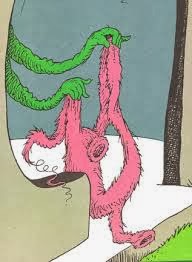 “No one would buy that fool Thneed,” responds the Lorax. But, of course, someone does. And the Once-ler begins cutting down Truffula Trees and making Thneeds at a fast clip, enlisting his family members to join him in his new enterprise. He even invents a “Super-Axe-Hacker,” able to “whack off four Truffula Trees in one smacker.”

The Lorax appears periodically to let the Once-ler know that various creatures are having to leave the town because they lived off Truffula Fruits, or couldn’t stand the smog, or could no longer drink the water that had been smeared by the “Gluppity-Glupp” and “Schloppity-Schlopp” created by the machinery of the Once-ler’s Thneed business. “Business is business!” responds the Once-ler.

Finally, the last Truffula Tree has been cut down and the Lorax leaves, along with all of the Once-ler’s family. The Once-ler is left alone with his empty factory and one Truffula Seed, the last one.

The story obviously raises many questions about environmental ethics, and it has inspired several interesting conversations I’ve had with children in the last couple of years. In one fourth grade class last year, the children asked who was responsible for the mess created by the production of Thneeds. The Once-ler? His family? The people who bought Thneeds? We had a long conversation about whether when we buy something, we are responsible for making sure that it wasn’t created in a way we would oppose. Is that feasible? If we don’t know about the harm something we purchase has caused, are we still in any way responsible?

This afternoon the question the second grade students wanted to explore was, “How could the Once-ler make a “Super-Axe-Hacker” when he only had one axe?” The conversation led to a discussion about whether it’s possible to have an entirely new idea and, if it is possible, how that happens. Where do ideas come from? One child noted that imagination and thinking are what leads to new things being created, and another said that nothing is created without reference to something else. Agreeing with this, another child suggested that the Once-ler might have been thinking that he needed something to cut more than one Truffula Tree at a time, and been looking at a pair of scissors, which can cut many pieces of paper at once, and that inspired him to come up with the idea for the Super-Axe-Hacker.

We started to talk about the nature of imagination, and one child claimed that children have more imagination than adults. All of the children seemed to agree. “I think that children don’t know as many things about the world,” one child said, “and so our minds are more free to imagine things.”