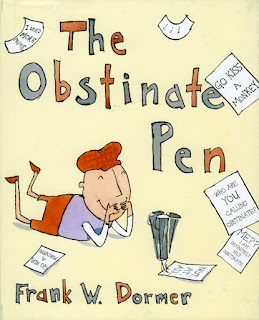 The Obstinate Pen by Frank Dormer is a new picture book about a pen with a mind of its own. Each adult who ends up with the pen finds that it won’t write what the adult intends, but instead writes what seem to be the pen’s own thoughts and observations, which are often insulting and consistently hilarious.

For example, Uncle Flood wants to write his first sentence with his new pen: The following story is all true. The pen instead writes: You have a big nose!

The book inspires thinking about where thoughts come from, whether we always do what we intend and the relationship between intentions and actions, and the nature of artistic inspiration.