Home / The Other Side 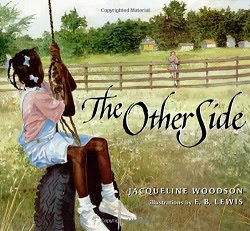 Jacqueline Woodson’s picture book The Other Side begins as follows: “That summer the fence that stretched through our town seemed bigger.” The story is narrated by Clover, who lives in a house on the side of the fence that separates the black townspeople from the whites in the town. Clover’s mother tells her not to climb over the fence, because it isn’t safe.

That summer Annie, a white girl Clover’s age, begins sitting on the fence each day, by herself. When Clover and her friends are jumping rope, Annie asks if she can join, but one of Clover’s friends, Sandra, says she can’t. Clover recalls, “That summer everyone and everything on the other side of the fence seemed far away. When I asked my mama why, she said, ‘Because that’s the way things have always been.'”

Clover finds herself always looking for Annie sitting on the fence. One day she comes close to the fence and Annie asks her name, and they begin talking. Annie notes that the fence was made for sitting on. Clover responds that her mother had told her not to go on the other side, and Annie says that her mother says the same thing, but that she hadn’t said anything about sitting on it, and the two girls begin sitting together on the fence. Clover’s mother observes this, but doesn’t tell Clover to stop sitting there, and one morning she notes, “I see you made a new friend.”

Eventually Annie and Clover ask Clover’s friends if they can join them jumping rope, and Sandra replies, “I don’t care.” So Annie and Clover join the group of young black girls playing. When tired, they all sit on the fence together.

The book ends with Annie saying, “Someday somebody’s going to come along and knock this old fence down,” and Clover responding, “Yeah, someday.”

The story’s text and illustrations are ideal for raising questions about race and racial identity and about the ways in which small acts can lead to social change. The questions the story raises include:

Why did the fence stretch through the town?
Why wasn’t it safe for Clover to climb over to the other side of the fence?
Why was it safe for Annie to climb over to Clover’s side of the fence?
Why did Annie want to sit on the fence?
Were Clover and Annie friends?
Does race define a person? Is it an important part of our identity?
Why did Sandra say no when Annie wanted to join the jump rope game, but agreed to let Annie join them later that summer when she was with Clover?
What does the fence represent?
Are there many kinds of fences?