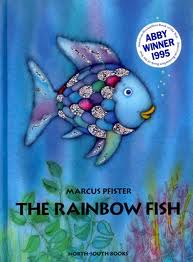 by Marcus Pfister is a picture book that parents seem either to love or to hate. It is the story of a fish, described as “the most beautiful fish in the entire ocean,” with rainbow-colored, iridescent scales. The other fish call him “Rainbow Fish,” and invite him to play with them, but he remains uninterested and aloof. A small blue fish follows him one day, asking for one of his scales, and is rebuffed. The rainbow fish ends up ostracized by all the other fish, and his scales begin to mean less to him with “no one to admire them.” Taking the advice of an octopus whose suggestions he seeks, the rainbow fish gives all his scales away, one by one, until he is left with only one. Surrounded by many fish, each with one iridescent scale, the rainbow fish now no longer looked different, and he “at last felt at home among the other fish.”

The story raises questions about being different versus one of the crowd, identity and self-worth, selfishness and generosity, the nature of beauty, and the meaning of friendship. Some people read it as promoting the message that we all should be the same, others as advocating for recognition of the value of inner beauty and generosity. To my mind, the story can be read as endorsing several contradictory ideas, which makes it quite philosophically interesting. I have found that it’s very appealing to children, and easily sparks conversations about independence and conformity, being unique versus fitting in, and what friendship requires.