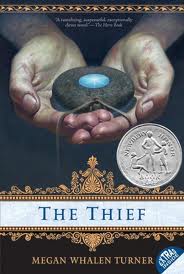 by Megan Whalen Turner is 1996 novel for young adults, the first of the series The Queen’s Thief. The story’s main character, Gen, is a thief who boasts about being able to steal anything, ends up in jail, and is recruited to steal a mythic spiritual object by the king. The novel tells the story of Gen and the people who accompany him on this journey to find and take this mysterious object.

This adventure novel is a philosophically rich page turner. It raises questions about loyalty, identity, political and social philosophy, heroism, and the obligation to tell the truth. Gen is a complex character whose identity is multi-layered and whose ethical code is slowly illuminated as the story unfolds. The novel can inspire young people to think and talk about what makes people who they are, whether we can ever really know another person, and what makes actions right or wrong.