Home / The Universe and Dr. Einstein

The Universe and Dr. Einstein 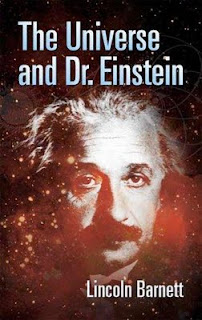 I’ve been re-reading the short book The Universe and Dr. Einstein

, originally written in 1948 by Lincoln Barnett. I first read and was inspired by this book when I was 17. An engrossing account, written for the general public, of the theories of relativity and quantum mechanics, this is an accessible and effective resource for introducing to high school students some of the philosophical questions raised by Einstein’s and other related work in physics.

Einstein wrote in the book’s foreword that much popular scientific writing either is too superficial or too inaccessible, but that this work presents the main scientific concepts well and ties them to questions about knowledge. To me the book reads almost like a thriller, describing carefully and with excitement the developments in physics that have resulted in a gulf between our commonsense view of the world, based on our perceptual experiences, and scientific understanding. The book discusses the relationship between developments in cosmology and philosophical problems about the relationship between appearance and reality, the reliability of sense perception, causation, the relationship between the observer and what is observed, and the nature of scientific knowledge.  Highly recommended!

This will be my last post for the academic year, as I am again planning to spend much of the summer working on my book, on which I have made substantial progress – hoping to have it finished in 2011. I’ll be back to this blog in September!