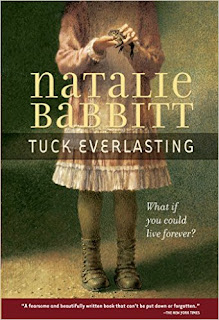 Recently I read a chapter (Chaper 12) from the young adult novel Tuck Everlasting, by Natalie Babbit, to a class of fifth grade students at John Muir Elementary School in Seattle. I was surprised that almost none of the students had heard of this classic work.

Tuck Everlasting is the story of the Tuck family, a family of 4 who, years ago, discovered a spring of water which, they realized after they all drank from it, makes you immortal. Winnie Foster, a 10-year-old girl who has stumbled upon the well and made friends with Jesse Tuck (who appears to be about 17, but who is actually 104 years old), is then kidnapped by the Tuck family in an effort to explain to her why she must never tell anyone about the spring.

In Chapter 12, Winnie has a conversation with Tuck, the father of the family, about time, the meaning of life, death, and what it mean never to grow old. Winnie is tempted to drink from the spring herself, but Tuck tries to describe to her what it would mean to be immortal and how living outside of the wheel of life presents its own challenges. Tuck reveals that he would like to grow again and change and tries to make Winnie understand that dying is an essential part of life, even if the prospect of it is frightening:

“[D]ying’s part of the wheel, right there next to being born. You can’t pick out the pieces you like and leave the rest. Being part of the whole thing, that’s the blessing. But it’s passing us by, us Tucks. Living’s heavy work, but off to one side, the way we are, it’s useless, too. It don’t make sense.”

The children wanted to talk about whether they would drink from the spring. In the beginning of the conversation, several children said that they would, that living forever would be desirable if they could choose the age at which they drank from the spring (most of them said they would do so around age 25). But several students noted that living forever would change what it meant to be alive, that “if you were immortal, you might have no motivation to do anything, because you would know you had forever to do it.”

We ended the conversation trying to imagine life without death, which, as one student pointed out, “would be a completely different form of living.”

Some other questions raised by the chapter:
What would life be like if we didn’t die?What is time?What is the meaning of life?What does it mean to grow up?Why is death frightening?What would happen if no one ever died?How do we make other people understand our point of view?How are things connected?If you could be one age forever, what age would it be?