Home / What Do You Do With An Idea?

What Do You Do With An Idea? 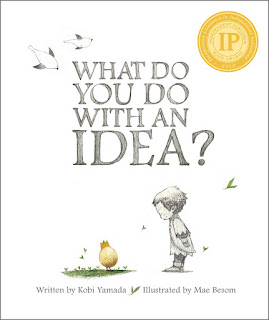 What Do You Do With An Idea? Written by Kobi Yamada and illustrated by Mae Besom, this charming picture book explores the nature of ideas and their role in our lives.

The story begins with a young boy, who has an idea. “Where did it come from?” he wonders. “Why is it here?” The idea at first seems “kind of small and fragile ” like a small golden egg in the boy’s colorless world. But it follows him everywhere. He can’t get rid of it. The boy is afraid that his idea will not be liked by others, so he protects his idea and hides it. And people do make fun of his idea, and he “almost” listens to them.

But he realizes that he understands his idea better than anyone else, and he decides to nurture it. The idea grows and one day it “spread its wings  took flight, and burst into the sky.”What do you do with an idea? The final line of the story is, “You change the world.”

This is a wonderful story to inspire discussions in classrooms or at home with your children. Some questions you might ask include:

Why was the boy embarrassed about his idea?Why did it take the boy so long to share his idea?Can ideas follow us around?Where do ideas come from?Do ideas add to our lives?Can you imagine a world without ideas?