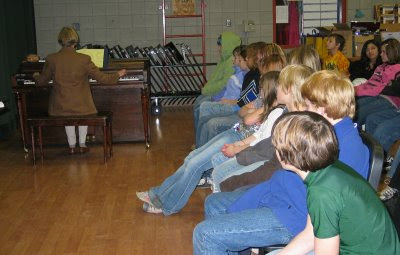 This will be the final post in this series.
What is music?
Is there some quality that anything considered music must have?
Can any sound count as music?
Does all music express emotion?
Is the emotion that music expresses in the music itself? In the composer? In us, the listeners?
What makes music pleasurable to listen to?
Why do we listen to sad music?
This week I invited Lynette Westendorf, a local pianist and composer, to visit our philosophy sessions to perform John Cage’s 4’33” and to join the conversation with the students and me about the nature of music. We met in the school band room, and we began by asking the students to consider the above questions, which I wrote on the board, as they listened to Cage’s piece. Lynette talked a little about Cage and his work, and then sat at the piano to perform the piece.
It was interesting to watch the students try to figure out what was going on as Lynette raised and lowered the piano lid at various intervals to mark the beginnings and ends of the movements. After 4 minutes and 33 seconds, she stood and bowed. In both classes in which we did this, the twenty plus students had all been incredibly respectful and quiet, and as she bowed they applauded.
First, I asked the students what they were thinking while Lynette was performing the piece. They had various answers — “I thought she was preparing for a really long time to start playing.” “I thought that she was doing some kind of spiritual preparation before starting.” “I thought that maybe she was having an anxiety attack.” — but all said that they had realized eventually that the point was that she would not play anything. I told the students that they were a far better and more accepting audience than the audience that first witnessed the performance of this piece in Woodstock, New York, in 1952, who whispered, walked out, and burst into an infuriated uproar at the end.
I told the students that John Cage considered this piece to be a “listening experience.” What did they hear? They heard, they said, “the shuffling of feet,” “the sound of the piano lid,” “the movement of bodies in chairs,” and “the humming of the room.”
Does the piece count as music?
The students were pretty divided in their views about that. A couple of students argued that it was music because the movements were timed and there was a lot of sound to which to listen.
One student said, “Yes, the piece is music because it is the sound of the world.”
Other students asserted that just because there are sounds doesn’t mean something is music.
One student took a book and dropped it on the floor, and asked, “Is this music?”
“Well,” said another student, “it could be. It depends on whether it is recognized as music.”
“What do you mean?” I asked.
“I think music exists when it is acknowledged as music. Anything can become music if it is understood by someone to be music.”
Other students claimed that to be music, there must be rhythm and it must be intentional. Does music have to be intentional? Lynette noted that Cage’s view was that it was not necessary for music to be intentional. Part of what he was trying to demonstrate with 4’33” is that music is already present in the world in the form of sounds that we often do not hear, like rain falling or a room humming.
We talked about how of all the arts, music was probably the form most central to human experience. One student pointed out that for most people, not a day goes by that we do not hear music in some form. And yet, we agreed, it is completely mysterious. Why do people like some forms of music and not others? Why does it make us feel so strongly? Can any sound be music? What really defines this art form about which many of us feel so passionately?