Home / What is most important in life?

What is most important in life? 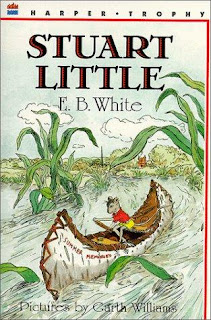 On Thursday I read a chapter of E.B. White’s Stuart Little

with the 4th grade students at John Muir Elementary. The chapter describes Stuart’s one-day experience acting as a substitute teacher. One of the first things Stuart asks his students is whether they know what’s important. The students in the story give various responses, including “a shaft of sunlight at the end of a dark afternoon, a note in music, and the way the back of a baby’s neck smells if its mother keeps it tidy.”

After the reading, I asked the John Muir students to write down five things in their lives that they thought were the most important. We put about 30 of them up on the board, and many of the students’ choices seemed to me close to what most people would say, pointing to what we think of as fundamental aspects of life – family, friends, food, health. Their responses also included things like playing video games, seasons, dance, sports, reading, etc. I then asked them what would remain on the list if they knew they only had a month left to live. The students thought seriously about this question and we pared the list down to much fewer items, including family, friends, food, medicine, and dance.

We then talked about what made these things important. The students mentioned having fun, being happy, and receiving comfort as the basis for what is important to them. One student then said that she would spend a lot of time planning her funeral and writing out invitations to the people in her life, because it would matter to her to spend her time doing something that felt productive. Another student commented that she would spend her last days reflecting about her life, thinking about the mistakes she’d made and the positive things she’d done, and kind of making sense of her life for herself. A third student agreed, remarking that he would take these reflections and put them in a journal and put them outside his door for his family to find, lock the door “and then die in a way that would feel peaceful.” Several students agreed with this and talked about how important it would be to them to say goodbye to the people they loved and to have their lives feel as if they’d had some purpose. We discussed whether what is important to you changes as you age and get closer to death, and whether death is in some respects the defining feature of life.

I thought about this conversation after it ended. Many of the reflections offered by the children were the kinds of things people often assume ten-year-old children aren’t thinking about and/or capable of contemplating. There was a thoughtfulness and seriousness to our conversation that reminded me of how vibrant philosophical thinking can be in children and how important it is to nurture that part of them.