Home / Why Do We Go to School?

Why Do We Go to School? 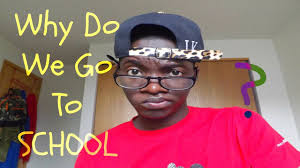 I had an interesting discussion earlier this month with a group of 5th grade students from Thurgood Marshall Elementary School, about why we go to school.

Thurgood Marshall is an interesting and unusual school. It has a General Education program, which serves neighborhood students who are almost entirely students of color with about 70% qualifying for free and reduced price lunches, and is also one of the Seattle’s hosts of the “Highly Capable Cohort (HCC),” which serves students who are mostly white and Asian, largely from middle to upper income families. These two programs have in the past been completely separate, and the school has for the past couple of years been working on ways to ensure that all the children have access to a rigorous and enriching education. Connecting the community and giving the students experiences working together is one of the school’s goals.

As part of that, four of us from the Center for Philosophy for Children are leading philosophy discussions all year for all fifth grade students, approximately 125 children, in groups that are a mix of students from the General Education and HCC programs, with a focus on social justice and race issues. In my first session with the group I am leading, in a warm-up activity I asked the students to think a big thought.

“What is the meaning of life?” said one child.

“Why do we go to school?” said another.

“Why is that a big thought?” I asked.

“Because there are so many possible answers,” he responded.

“And because we spend so much of our lives in school,” added another student.

This led to a long conversation that took up the entire hour we had together. One student suggested that we go to school to learn, but several students pointed out that we “are learning all the time,” in and out of school. Another student remarked that there is a difference between learning and education, and that we go to school to be educated. We puzzled for awhile about what it meant to be educated, and several students contended that this was a more formal process than learning and that education, unlike learning, required teachers and certain requirements.

“Is getting an education important?” one student asked.

A student then said that education wasn’t the only reason to go to school. “There are social reasons too,” she stated. “If you homeschool, you don’t have to deal with kids you don’t know and maybe don’t like that much, but in school, you have to learn how to deal with all kinds of people.”

“And on the bus,” put in another child. “There are all kinds of annoying kids and you just have to learn to put up with them.”

Then another student interjected, “What exactly makes a school, as school, anyway?”

We thought about that. One student suggested that a school was a place with lots of different people moving around, but I responded that this is also true of a train station. Other students suggested that school has to have teachers, but we also acknowledged that you can have teachers outside of school.

We ended the session by noting that we had begun by thinking about why we go to school, and eventually began reflecting about the very concept of school itself.