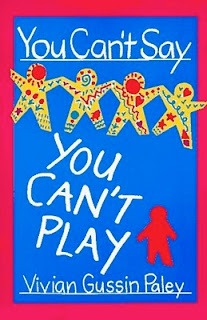 I’ve been re-reading Vivian Paley’s book You Can’t Say You Can’t Play. The book describes Paley’s observation of what she calls the “habit of rejection” year after year in her kindergarten class, in which certain children (the “ruling class,” as she calls them) decide which children will be accepted and which will be excluded, setting the stage for years of children being rejected and a social hierarchy dominating.  Paley, tired of it, posts a sign one morning in her class that reads “You Can’t Say You Can’t Play.”

Many of the children are aghast. “But then what’s the whole point of playing?” one child remonstrates. Is it acceptable for the teacher to exercise control over what the children are doing in their private social activities?

Paley’s new rule inspires at the school a months-long inquiry about whether this new rule is fair and can work. The kindergarten students accept the new rule relatively quickly, and Paley speculates that this kind of intervention has to take place at very early ages. Working with older elementary students, she observes that the social hierarchies are already firmly in place. The book considers whether this kind of moral issue can and should be legislated. Do the children have the right to choose their companions? Does such a right include an entitlement to reject certain people? Paley weaves a thoughtful examination of the moral and policy issues involved with an engaging description of the children’s reactions.